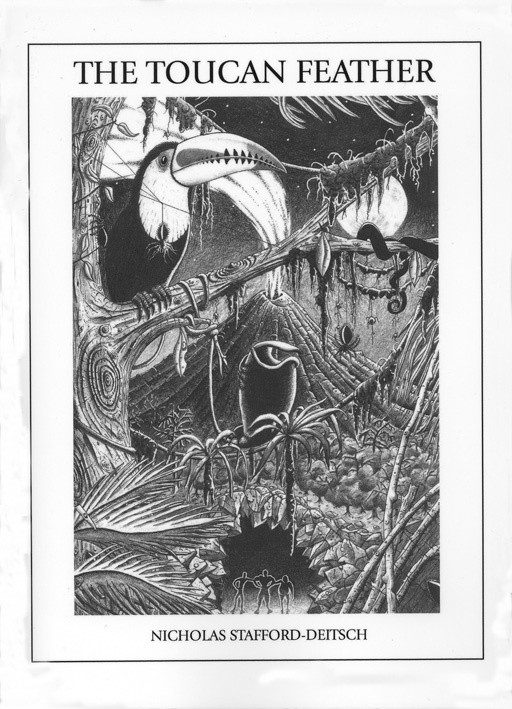 The Toucan Feather is an inspirational, allegorical 55,000 word novel written and illustrated by Nicholas. It is suitable for readers of twelve and older. There are 68 black/white illustrations, many of which are full page. The market research has consistently returned scores for The Toucan Feather that match Coelho’s The Alchemist. The meaning of the word tocamu and the design of the symbol are revealed in the novel, which is available as a 236 page A5-sized (148 x 210mm / 5.8 x 8.3 ins) paperback.

Imagine a magnificent civilization bordered on one side by the turquoise waters of a tropical ocean, on another by tangled rainforest; picture a city with a temple hewn from pink marble, a palace whose gilded towers reached skyward in homage to an ancient wisdom that the old ones claimed was captured in a symbol. The contented people shared their world with lemurs, lemon-winged butterflies and chattering parakeets. They had no need for an army or for a word meaning “hunger” and strangers journeyed from distant lands in search of friendship and guidance.

But the civilization nestled beneath the blackened slopes of a great volcano whose goddess, Banakaloo-Piki grew ever more jealous of their happiness until she turned day to night by emptying the molten blood in her belly on the city. Though she had destroyed a paradise and the ancient wisdom was lost, her vengeance was incomplete …

Miago is a young shell collector struggling to survive amongst the ruins. His cowering people now live in a loveless and greed-driven world, ruled by the cloaked and hooded Men of Knowledge whose decrees only add to their suffering. Whether drifting over the reef or setting snares in the forest, Miago’s thoughts never stray far from a forthcoming ceremony to mark his passage into adulthood. At it he must make his Life Choice – a decision that will dictate every part of his future, made permanent when a terrible scar is burned on his forehead by a red hot branding iron.

Miago asks questions. But because his friends, family and the beautiful T’lu-i provide few answers, he defies his father and forms a bond with a mysterious stranger who changes his name from the Teacher, to the Maker and then to the Chameleon to avoid detection by the Men of Knowledge. The man also refuses to answer Miago’s questions, preferring to talk in riddles but little by little, he helps the frustrated boy develop the understanding he will need to face his uncertain future.

There is an alternative to the branding ceremony but it fills Miago with dread. Although the volcano is said to contain a fabulous treasure, it is also rumoured to play tricks with your mind. And Banakaloo-Piki will only allow him to enter if he defeats the brutal half-human, half-spirit Guardians that block the jagged entrance. By day, people warn Miago of a network of trap-filled caverns that lure the unsuspecting to their deaths; at night his dreams are invaded by cave demons, vampire bats and bone beetles … and he knows that no one who has entered the volcano has been seen again. As Miago wrestles with his doubts, as one by one the “truths” that have given his life meaning are exposed as lies, he finds himself drawn by the volcano’s silent challenge that will either kill him, or change him forever.

A well constructed story full of important messages for the young and not so young. Through using this wonderful tale as metaphor no teenager will remain untouched having read it.